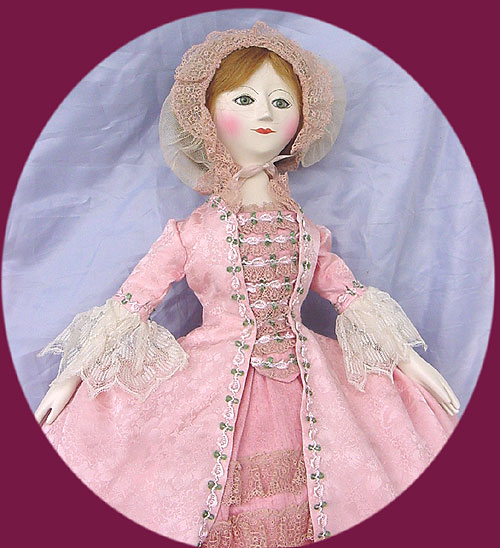 Since I am not actually in the doll business but am offering these for sale,  I feel I need to share the whole story with my customers.

Many years ago I bought a collection of old dolls, and in the collection was a carved wooden Queen Anne doll from about 1760. Her arms and legs and most of her paint were missing, but she still had her glass eyes with black irises and no pupils. When you touched her you felt the 250 years or so she has been around.

A few years after I got her, I finally decided she needed to have limbs and be dressed, although I would never repaint her, so I took her to my son, who was quite a good wood carver. I also took many books with clear photos of these old Queen Anne dolls that were complete so he could easily see how her arms and legs should be made.

My son, Kurt Kraal, who was 33 at the time and had an auto painting business, was not into dolls, but he loved wood, and he was completely charmed by the old Queen Anne, so much so that he decided he wanted to carve one himself, which he proceeded to do. He did three of them, and I have #1 and #3, but number two disappeared shortly after Kurt was killed a couple of years later. No one knows where it is.
Kurt had no children to inherit his dolls, and his sister with whom I share a home has none, so we have decided to offer his dolls for sale in hopes they will go to a collector who will appreciate them. The first one to be offered here is the #3 doll, click on Queen Anne to go and see all the photos of the doll.
The old doll has been sold. If you have questions, feel free to email me or call me any day between 12 noon and 10 PM at 360-952-1458

Hi Mary, sorry it is confusing for you.  Here is a picture of a bolt of fabric telling how to tell … END_OF_DOCUMENT_TOKEN_TO_BE_REPLACED

I am sorry, I have been out of the doll business for almost 20 years and all the dealers I knew have … END_OF_DOCUMENT_TOKEN_TO_BE_REPLACED

Before eBay set their own ideas for what is antique or vintage, a doll to be considered vintage had … END_OF_DOCUMENT_TOKEN_TO_BE_REPLACED